“Sounds of the 60s” with La La Brooks, Dennis Tufano, and The Flamingos LIVE! at Resorts Atlantic City 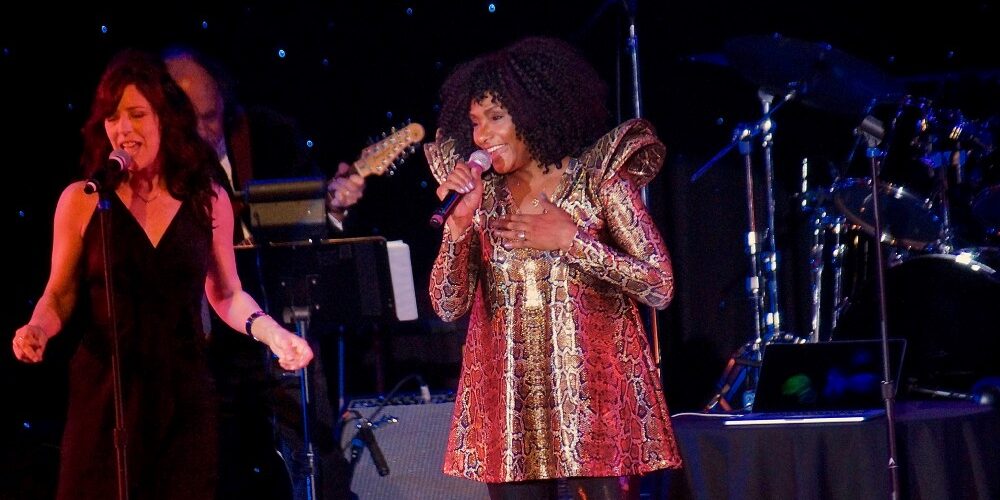 Opening with her Top Ten hit, “Then He Kissed Me,” Brooks still sounds just like she did when she recorded the lead vocal on that song with The Crystals back in 1963 — her iconic voice still rich and girlish. Backed up by a tight band featuring a top-notch rhythm section, horn section, and backup singers, Brooks impresses and entertains the audience with her talent.

“I was only 13 when I joined the Crystals and just 15 when we started working with producer Phil Spector,” reveals Brooks.

Moving on to the Crystals’ 1963 tune, “Little Boy,” Brooks sings, “Little boy, please let me be your little girl,” the back-up singers’ vocals deftly supporting La La’s effortless lead. As the ensemble performs, the audience claps along and moves to the easy beat of this innocent tune, making everyone at the Superstar Theater feel like they’re right at home.

Brooks’ next number is the power doo-wop ballad, “There’s No Other (Like My Baby),” her vocal crying and pleading for all to listen as she croons, “There’s a story I want you to know/‘Bout my baby, how I love him so.”

Explains Brooks, “That was the first recording The Crystals ever made. Barbara Allston was the lead singer on that one — and I love Barbara Allston,” before noting, “This was even before Darlene Love was with the group.” The audience smiles and applauds when Brooks goes on to quip, “And we all made Phil Spector as much as he made us!”

Stating, “Phil recorded this next single, too,” Brooks launches into a medley which opens with The Ronettes’ 1963 smash, “Be My Baby,” and continues with other ’60s “girl group” hits including The Supremes’ “Baby Love,” The Shirelles’ “Will You Still Love Me Tomorrow,” and The Dixiecups’’ “Goin’ to the Chapel.” As La La and the singers vocalize, horn players sway back and forth to the beat and lights change colors along with the mood, all while audience members sing along to these happy-go-lucky songs.

As the audience cheers, Brooks reveals, “We only had a twenty-minute rehearsal for that medley,” respectfully adding, “Thank you so much.”

At this point, she launches into her rendition of a Barry Mann/Cynthia Weil penned Crystals’ number which is currently featured in the Broadway musical, Beautiful. Entitled “Uptown,” Brooks fervently croons, “But then he comes uptown each evening to my tenement/Uptown where folks don’t have to pay much rent… Then he’s tall/He don’t crawl/He’s a king.”

Going on to confess, “We did this next song with Phil when I was 15,” Brooks asks the crowd to “Stand up and party with me!” on The Crystals’ monster hit for which she sang the original lead vocal — their 1963 smash, “Da Doo Ron Ron.” Her voice never sending better, audience members leap to their feet as sparkling lights dance above their heads and strobes flash, everyone singing and dancing along.

“Don’t you sit down now!” asserts Brooks with a smile, before stating, “This next lady was bad!”

Here, she launches into her final number of the evening — a slow, funky version of Tina Turner’s “Proud Mary” — passionately singing the song’s famous opening line, “Left a good job in the city….”

Continuing, she keeps the tempo slow, but once the next verse comes around, La La goes crazy! She sashays down to the ground as the tempo gallops at a frenzied pace. The band rocks, and the audience drinks in every aspect of Brooks’ passionate performance.

With this, Brooks leaves the stage and makes her way into the audience, getting up-close-and-personal with this happy group of music lovers. Once she finds herself among the packed crowd, she dances with an obliging gentleman — and then poses for photos with fans — before winding her way through the audience and climbing the stairs back up onto the stage.

For her efforts, the crowd rewards our Miss Brooks with a well-deserved standing ovation!